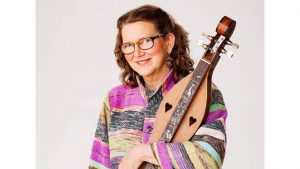 One of the twin cities’ favorite folksingers, Sally Rogers, will make a rare solo appearance at the Ginkgo Café, 721 Snelling Ave., in St. Paul on Friday, September 10 at 8PM. Often heard at this iconic café with her singing partner, Claudia Schmidt, this will be her first solo concert for her Ginkgo fans.

Sally Rogers began her career as a full-time touring musician in 1979, after encouragement from Stan Rogers, the legendary Canadian singer-songwriter.  That was followed by an invitation from Garrison Keillor to appear on A Prairie Home Companion.  She appeared more than a dozen times on that show, which launched her performing career.  Her travels have since taken her to Europe, China, Hungary and Poland, England and Scotland and across the United States. Her concerts enfold the audience in the music as they are encouraged to join in throughout the evening.

Sally has released fourteen albums, not including several collaborative projects with other artists. Her first album, The Unclaimed Pint, has stood the test of time and continues to be a big seller. Her songs are included in the Unitarian Hymnal, the Quaker songbook, Rise Up Singing, Rise Again and both national music textbook series. Several of her songs are considered to be folk music classics.  Her latest album, Old Friends I’ve Never Met was released during COVID times last year to wide acclaim.

Although much of Rogers’ time is spent teaching music in the public schools and being an artist-in-residence these days, she continues to perform in concerts both solo, with her singing buddy of 30 years, Claudia Schmidt, and with her husband, Howie Bursen.  Performing at festivals, clubs and concerts across the nation, her gorgeous singing voice, boundless energy and good humor are welcomed from coast to coast. She helped soothe many souls during the pandemic with her Song a Day Keeps the Virus Away series on her Facebook page where she sang one song daily, M-F for 250 days.